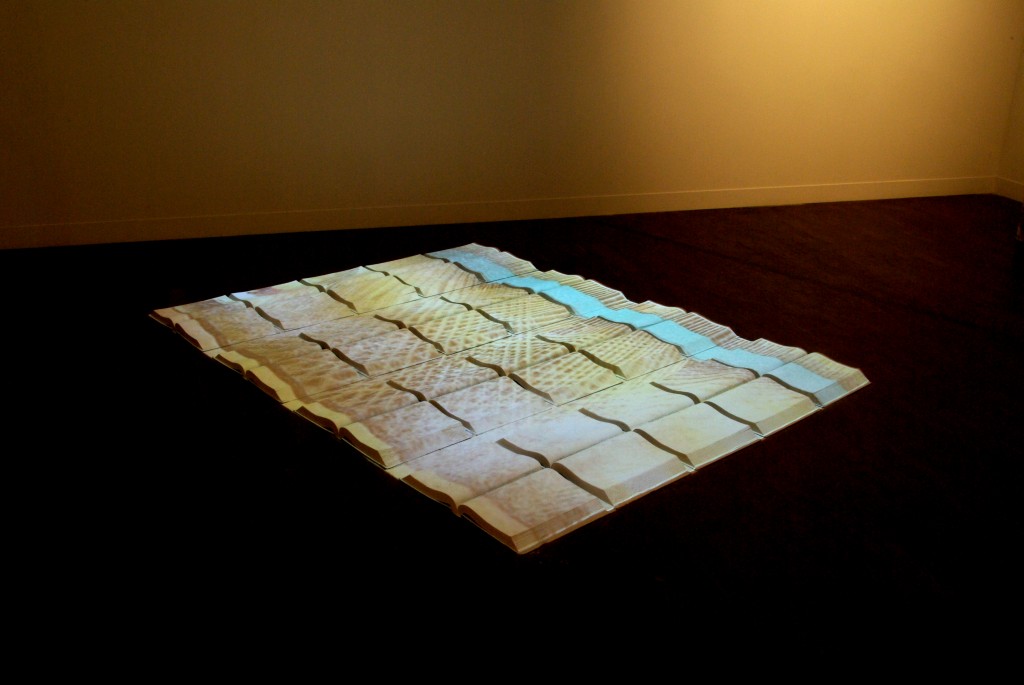 Floor-based installation in Southamptons Bargate Gallery, with a ceiling mounted video projection. The footage showed a loom gradually being erased by a dusting of ground quartz. The footage was looped and reversed, allowing the loom to gradually appear and disappear over a 10-minute time frame.

The Shroud proposal went as follows:

To produce a work with a projected image that will have its received form influenced by a ‘screen’ of encyclopaedias, its fulcrum being the interface between tradition and innovation. Each time the image is presented clearly, distinct from the books underneath, it begins a slow process of erasure/absorption gradually blending until it is indistinguishable from its ground.

The notion of what it means to ‘be human’ today is embedded in uncertainty. The writer Thomas McEvilley described ours as the Age of Doubt, and the increased frequency of questions pertaining to our identity reflect this. Popular examples being: “What is Britishness?” “How do we define our sexuality?” and “Where do we draw cultural boundaries?” The question posed by this exhibition is also symptomatic of this uncertainty.

The interdependence of technology, media and knowledge forms a complex dynamic where growth is defined by need. This yields a cyclical pattern of novelty and absorption, punctuated by the discarding of extraneous elements.

With regards to the question posed by the exhibition, I believe that the fear of technology and loss of humanity is irrational, primarily because the definition of the term ‘humanity’ is always evolving in relation to external contexts. The idea of the ‘self’ is increasingly seen as a composite, a convention necessary for survival. Technology, whether defined as a wheel, steam engine, or silicon chip has always grown from humanities needs, and does indeed form an inescapable part of our evolution.

In this exhibition I wish to present an installation using books, dust and video projection.

>   A grid of open encyclopaedias, placed on the floor, will be dusted.
>   The information, therefore, will be erased.
>   Mounted above will be a data-projector, at the specific height whereby the image, projected vertically down, will fit exactly to the white dust screen.
>   The undulating shape of the open books will distort the film.
>   The film projected will be of an image slowly dissolving as it is dusted with the same quartz particles that cover the books.
>   The film will reach the point where the projected image and the screen surface will be the identical. With the exception being that one is ‘virtual’, and the other is ‘real’.
>   The film projection will be slowed to make each frame visible.
>   The film will loop continuously between erasure of the image, then reversing, slowly lifting the dust and revealing the image again.