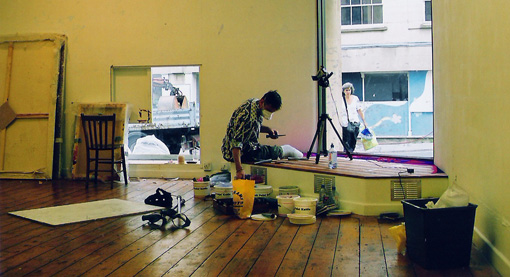 David is the Lead Artist/Programme Co-ordinator for Chapel Arts Studios (CAS) in Andover, and has spent several years training and working as an installation artist, educator and project manager.

After completing his Masters in 2005 David received a one year Arches studio bursary from aspace arts.  Within the same year he was also awarded the Go Make! Bursary, from the disability arts organisation DadaSouth. and later continued working for them as an Artist Advisor on their Dada Exchange programme.

During this time he also worked for Creative Partnerships as both a Workshop Leader and Project Manager before 2009 when Test Valley Arts Foundation offered him the position of Lead Artist/ Programme Co-ordinator for Chapel Arts Studios.  The last five years he has spent focusing on the creation and development of the studios.

He has been a visiting lecturer in Winchester School of Art, Portsmouth University and Brighton University, and taught at all ranges from junior school upwards.  In 2014 he became a Fellow of the Royal Society of the Arts and is currently working for Mottisfont Abbey as the Community Facilitator on their two-year “A Place For Art” residency programme.